Cladosporium is a common fungus in indoor and outdoor environment and is one of the most well known cause of allergy in sensitized individuals. Generally, exposure to mold occurs through inhalation, skin contact and ingestion. While all molds are potentially allergenic (i.e., can trigger allergy reactions) the amount of spores required to cause respiratory allergy symptoms has not been established and varies between different mold species and individual’s level of sensitivity. For example, 100 spores/m3 of air of Alternaria can trigger allergy symptoms whereas 3,000 spores/m3 of Cladosporium are required to cause allergy symptoms. 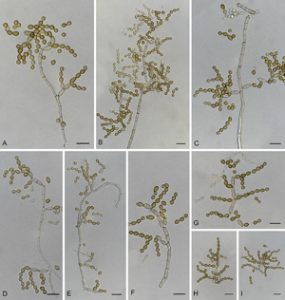 The Genus Cladosporium currently has 218 recognized species. Identification of Cladosporium as a Genus is relatively easy. However, it is difficult to identify species of Cladosporium purely on morphological and cultural characteristics. Most isolates from air and from indoor environment have been found to belong to one of three species, that is, C. sphaerospermum (with spores often nearly spherical), C. cladosporioides (with smooth spores) and C. herbarum (with warty spores). For a long time, these 3 have always been thought to be species complex and this has now been confirmed in a worldwide study. The study showed that C. sphaerospermum is comprised of 23 morphologically similar but distinct species while C. cladosporioides and C. herbarum are comprised of 66 and 37 distinct species respectively.

White mold or white mould does not refer to a specific type of mold. While there are some molds that are typically white, majority of the molds may appear white prior to spore production. White Mold or Efflorescence Sometimes people mistake white salt (efflorescence) for white mold. Just like with mold, efflorescence may appear as END_OF_DOCUMENT_TOKEN_TO_BE_REPLACED